The Story of Sennacherib and His Invasion of Israel

Can we all turn to Isaiah chapter 36? I would like us to read together chapters 36 and 37. When I was a young man, I heard Mrs. Hannah Lowe give a message on these passages in New York City. She was a missionary to Colombia for about fifty years, beginning in the 1930’s. It was a message that changed my life, because it was one of those times when I understood that we are not saved simply so that we can go to heaven. We are saved in order to do God’s will on the earth. We are saved so that we can enter into the battle, resisting the enemy, and drawing near to God—standing against the devices of the evil one, and praying as Jesus prayed and taught us to pray, “Your will be done on earth as it is done in Heaven.” 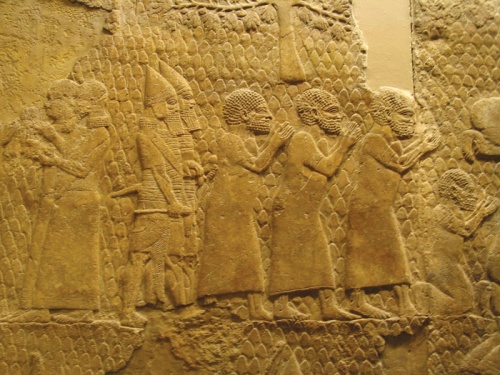 Israeli Prisoners from Lachish (Relief from the British Museum)

This story in Isaiah is the story of an evil king, Sennacherib, the king of Assyria—a terribly evil man. You need to understand regarding the Assyrian Empire that, when they attacked a city, they would pile up the dead bodies in large mounds. You could say that they were the Nazis of their day. They would march through a territory in order to destroy and to tear down. They had already marched through the Kingdom of Israel and even parts of the Kingdom of Judah. The city of Lachish in Judah had fallen. Archaeologists have actually done digs at Lachish and found messages written by Israeli soldiers asking for help against the Assyrian army. In one final message, a soldier stated that he realized that no help was going to come. Lachish was in fact destroyed and burned to the ground.

Now this is also the story of another man, King Hezekiah of Judah. Thank God for Hezekiah! Hezekiah was a good man and a godly man, a man who trusted in the Lord. He didn’t have great armies to resist the Assyrians. He didn’t have strength and he knew it. But he knew that God had strength, and he stood in the face of the threats of the enemy and prevailed by faith. If it had not been for Hezekiah, not only would Israel have been cut off, but Judah would have been cut off before its time as well.

Never forget that the devil is a murderer. He promises good, but he brings death. He promises blessing, but he brings suffering. He is a liar, and that will never change till the end of time. The devil speaks to every one of us. The devil spoke to Jesus, and who am I that he will not speak to me? So what do I do? I say, “Devil, you are a liar and I refuse your words, and I trust in my God.”

Let us read chapter 36 together:

Now it came to pass in the fourteenth year of King Hezekiah that Sennacherib king of Assyria came up against all the fortified cities of Judah and took them. Then the king of Assyria sent the Rabshakeh [field commander] with a great army from Lachish to King Hezekiah at Jerusalem. And he stood by the aqueduct from the upper pool, on the highway to the Fuller’s Field. And Eliakim the son of Hilkiah, who was over the household, Shebna the scribe, and Joah the son of Asaph, the recorder, came out to him.

Then the Rabshakeh said to them, “Say now to Hezekiah, ‘Thus says the great king, the king of Assyria: “What confidence is this in which you trust? I say you speak of having plans and power for war; but they are mere words. Now in whom do you trust, that you rebel against me? Look! You are trusting in the staff of this broken reed, Egypt, on which if a man leans, it will go into his hand and pierce it. So is Pharaoh king of Egypt to all who trust in him.

“But if you say to me, ‘We trust in the Lord our God,’ is it not He whose high places and whose altars Hezekiah has taken away, and said to Judah and Jerusalem, ‘You shall worship before this altar’?’” Now therefore, I urge you, give a pledge to my master the king of Assyria, and I will give you two thousand horses — if you are able on your part to put riders on them! How then will you repel one captain of the least of my master’s servants, and put your trust in Egypt for chariots and horsemen? Have I now come up without the Lord against this land to destroy it? The Lord said to me, ‘Go up against this land, and destroy it.’” 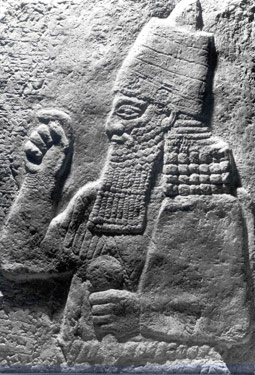 Relief of Sennacherib of Assyria

Then Eliakim, Shebna, and Joah said to the Rabshakeh, “Please speak to your servants in Aramaic, for we understand it; and do not speak to us in Hebrew in the hearing of the people who are on the wall.” But the Rabshakeh said, “Has my master sent me to your master and to you to speak these words, and not to the men who sit on the wall, who will eat and drink their own waste with you?”

Then the Rabshakeh stood and called out with a loud voice in Hebrew, and said, “Hear the words of the great king, the king of Assyria! Thus says the king: ‘Do not let Hezekiah deceive you, for he will not be able to deliver you; nor let Hezekiah make you trust in the Lord, saying, “The Lord will surely deliver us; this city will not be given into the hand of the king of Assyria.”‘ Do not listen to Hezekiah; for thus says the king of Assyria: ‘Make peace with me by a present and come out to me; and every one of you eat from his own vine and every one from his own fig tree, and every one of you drink the waters of his own cistern; until I come and take you away to a land like your own land, a land of grain and new wine, a land of bread and vineyards. Beware lest Hezekiah persuade you, saying, “The Lord will deliver us.” Has any one of the gods of the nations delivered its land from the hand of the king of Assyria? Where are the gods of Hamath and Arpad? Where are the gods of Sepharvaim? Indeed, have they delivered Samaria from my hand? Who among all the gods of these lands have delivered their countries from my hand, that the Lord should deliver Jerusalem from my hand?’”

But they held their peace and answered him not a word; for the king’s commandment was, “Do not answer him.” Then Eliakim the son of Hilkiah, who was over the household, Shebna the scribe, and Joah the son of Asaph, the recorder, came to Hezekiah with their clothes torn, and told him the words of the Rabshakeh. (NKJV)

How many here today know how this story ends? Raise your hands. I want you for a minute to forget that you know how the story ends, and put yourself in the situation between chapter 36 and chapter 37. Sometimes the Bible will become more real if you literally put yourself into the story, because this all really happened! We have the archaeological evidence of exactly this battle, and of these cities that were under attack. But Sennacherib never wrote in his account how the story actually ended. His version of the story ends with the words, “I pinned Hezekiah in a cage like a bird.” That is what he wrote in his records.

So let us imagine ourselves for a moment there on the walls of Jerusalem. The other large cities of Judah have fallen, Israel has fallen, the nations that surrounded Israel have been destroyed, and tens of thousands have died. Some of you have seen the columns of smoke, not just coming from the burned cities, but from the burned piles of bodies. Like the Nazis, the Assyrians mowed people down, and then piled the bodies in mounds, setting them on fire. Imagine the stench! And there all around Jerusalem is the army that has just marched through nations. You feel like a little company of Boy Scouts there on the walls of Jerusalem—no strength, no power. And now put yourself in Hezekiah’s place. You are the king! What should you do?

Now why did I think of this passage today? Because if you look at Sennacherib from the perspective of almighty God, he was nothing more than a little mouth boasting great things. From the human perspective, he looked like a very big mouth, ready to eat people up. But take hold of God’s perspective, and he is but a man with his breath in his nostrils. I thought of this passage because, in our generation, there are little voices that boast great evil against the Lord and against His work in the earth. President Ahmadinejad of Iran is one such person. He wants to destroy Israel, to cut Israel off. Why? What is Israel to him? The reality is that Israel is only a tiny country. It is nothing compared to the rest of the nations on earth, but to the devil it is everything—because Israel is the center of God’s plan. From Jerusalem, Jesus will one day reign over all the earth. Ahmadinejad doesn’t understand any of that. All he knows is that Islam is supposed to control the earth one day, that the time is near for the Jews to be destroyed, for the Christians to be destroyed if they will not convert to Islam.