In Whom Are We Trusting?

Now step back from current events for a moment, and think again about this story regarding Sennacherib and Hezekiah. What was God’s promise to Jerusalem? That it would be the city of the Great King, that it would be where the Messiah would come, and that it would be where God would reign forever over the earth! There are times in the plan of God when things become very narrow. It all came down to the faithfulness of an Abraham at one point. It came down to the faithfulness of a Joseph at one point. It came down to the faithfulness of a Job at one point. And it came down to the faithfulness of a Hezekiah. As the king of Israel, would he believe the threats, the very real threats that this Assyrian general was making? Or would he believe God? Look at the first part of the threat, the lies spoken against Hezekiah and against Jerusalem, because the devil does the same to us as well—he comes at us with fear. Who are you trusting in? In whom do you place your hope? In whose hands is your future? Do you really believe God, or will you be afraid in the face of the threats of the enemy? The devil comes with fear, and every one of us has times when we are afraid. Often, we have reason to be afraid, but what is greater, our fear or our God? We have a choice when fear come—with armies behind it, with real problems behind it, with real sickness behind it, with even death behind it. Who will we believe? Will we believe the fear? If we do, we bow under the kingdom of the devil because the spirit of fear does not come from God. It comes from the big bully who comes at us with strong fear, but God is more powerful than that fear! Fear is ultimately a lie against God Himself!

That was the first threat against Hezekiah and it did not work, but what was the second? The Assyrian field commander accused Hezekiah of being a liar as he spoke to the people of Jerusalem: “Do not let Hezekiah deceive you, for he will not be able to deliver you; nor let Hezekiah make you trust in the Lord…” And the devil lies to us as well: “Oh, don’t believe those Christians. They don’t know what they are talking about.” “Don’t believe those elders.” “Don’t believe what your brother or sister is telling you. You know better!” Behind many of those times when we think we know better than others stands a devil who is all too ready to lead us into deception. God has given us brothers and sisters in Christ because none of us sees the whole picture by ourselves. The Lord has set us in the Body because we need one another. The people of Jerusalem needed a king who spoke the truth, who tore down the altars of false gods. Sennacherib told the truth only partially when he said to the people of Jerusalem, “Hezekiah took away your altars! He took away your gods.” The first statement was true, but the second was a lie. The devil always mixes truth with a lie. Hezekiah took away the altars because Israel was to worship God alone. And He was to be worshipped in the temple, not in the high places. Under the reign of Hezekiah, God was doing a work in Jerusalem, laying the foundations of revival there, and the devil did not want it to come to pass. The devil wanted to cut off God’s work, and the lie he used was that Sennacherib had been sent by God to destroy Jerusalem. Yes, Sennacherib had been sent to destroy the nations that confided in false gods, but he was not sent to destroy those who trusted in the Lord.

Brothers, days of war are coming. God is going to shake the earth and much will fall, but those who trust in God will never be shaken. If I put my hope in anything else besides the Lord, it will be shaken. I say this especially to you young people because you understandably want to lead a normal life, but what Mrs. Lowe warned us when we were young was that we were not living in a generation that can simply live a normal life. This is the generation in which we must seek the Lord; this is the time to seek first the kingdom of heaven. As she said to us as young men and women, “You will never lose serving God.” God has given me a lovely Colombian wife, and four beautiful sons—but He gave them to me for His sake. They are not mine, they are His. Everything is His! Give Him all, and He will bless you. But He will bless you with things that ultimately do not belong to you, but belong to Him. Because everything that belongs to Him is forever, and everything that belongs just to us will pass away. 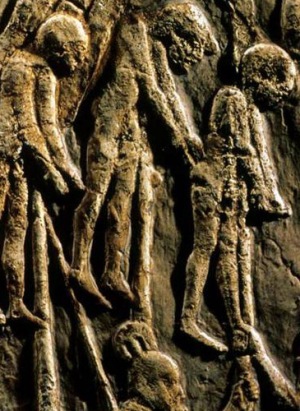 Relief of Israelites impaled at Lachish

" Now what was the next lie that Sennacherib was using against Jerusalem? The Assyrian field commander was saying in effect, “Don’t trust in God! Trust in the words of Sennacherib. Make peace, and you will live in peace. I will leave you alone in your houses. You will have your fig trees and your vines.” But some Jew with a sense of humor could have said, “Yes, just like all those other peoples whose houses and cities you burned down to the ground!” The devil is a liar. He says, “Serve me.” He said to Jesus, “Serve me, and I will give you all the kingdoms of the earth.” But then there is that word in verse 17, “until I come and take you away to a land like your own.” That is the devil’s lie! “Do you want to have peace? Then listen to me until I come and take you away…” Stop for a moment at that phrase, “take you away…,” because everything that follows it is a lie. Every promise of the devil is a lie. Every promise of the devil may bring peace for a little while, but it ends in death. And death and destruction is what the devil intended here. You can almost hear the demons proclaiming, “We will destroy Jerusalem! We will make an end of these people, so that God will not have His way in the earth.”

God was not done with Jerusalem, but Sennacherib came to make an end of Jerusalem. And that is why we need to read the next chapter of Isaiah. God is not done with Colombia, and that is why Colombia is surrounded by people who hate her. Colombia has been called the Israel of Latin America. Make no mistake—lest we become proud! Israel is nothing special in itself. It was the least of the nations, but God set His love upon it, for His own name’s sake. Many North Americans despise Colombia, and in some ways Colombia is another of the “least” of the nations. But God has set his love upon Colombia. He takes the last and makes it first, not so that we can boast of what we have done, but so that we can boast of what God has done. Where the devil desired death and destruction, God has given life and salvation.