Today’s Battle Is A Spiritual Battle

Brothers and sisters, the battle is in the house of God. It is not against Chavez’s submarines, nor his new jet aircraft, nor his latest tanks. God is on the throne, and the threats by Hugo Chavez and his officials are against God Himself because men are saying, “We will reign in the earth, and you Jews, you Christians, you will not stand. We will run you over!” And behind those last words are the words, “We will run over your God!” Listen to the words of Hezekiah in verse 3 because this proves that he was a man of vision. He rightly said, “This day is a day of trouble and rebuke and blasphemy….” Please note, however, that Hezekiah was not concerned about himself but about his people. King Saul was concerned about himself: “me, my name, my honor,” while King David was concerned about God and His honor. Hezekiah was not concerned about himself! He was afraid for the children of Israel, and he knew that the Lord had plans for His people. Note that he says, “for the children have come to birth….” He did not say “to the point of death.” They have come to the point of birth, “but there is no strength to bring them forth.” What was Hezekiah believing for in his generation? Revival! He prayed for revival from childhood. He tore down the high places, he destroyed the works of darkness for one reason only, and I paraphrase his words: “Lord, may we see your power in our land! The children are at the point of birth, You is about to do a great work, but we have no strength to bring it forth, because the devil has come to destroy.” But then he says, “It may be that God will hear that general’s words, because he did not blaspheme against me. He blasphemed against God.” 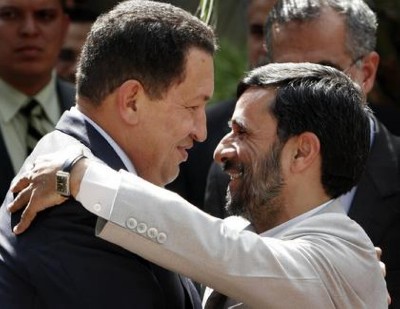 Chavez with Ahmadinejad of Iran

Ahmadinejad and others like him are blaspheming against the God of Israel. They are saying that Islam will reign over the earth. It will not! Today is the day in which God is moving for the Muslim nations. It is time for them to escape their darkness, and come to the light. Muslim children are coming to birth through Jesus Christ and being persecuted, their churches firebombed. They are being thrown into prison, and some are being killed throughout the Muslim world. But God is going to do a work in bringing out a last days’ remnant from among the Muslim people. And God desires a remnant out of the lands where Catholic religion ruled for centuries as well. The children are come to birth, escaping the idols, escaping the witchcraft, escaping the spiritual oppression, escaping out of the darkness into the light. But we don’t have the strength to bring them forth. We cannot make revival happen. We cannot destroy the works of the enemy, but we can go into the house of God.

This is our privilege, because as Psalm149 says, this is the privilege of the saints of God, “To execute upon them the judgment written….” (KJV) Judgment was also written against Sennacherib because, like the devil, he overstepped his bounds. There are little mouths in the earth who are lifting themselves against God. Brothers, the judgment against them is already written, but will we go into God’s house and cry out to Him? Will we tear down the high places? What must we pray for Colombia? “Lord, tear down the idols! Lord, tear down the high places! Lord, destroy the witchcraft! Cleanse the land!” God wants to send revival, but Colombia needs Hezekiah’s who will cleanse their own lives, and then begin the work of cleansing the land. You cannot cleanse Colombia until you let God cleanse you. You cannot be a soldier for Christ, until the sword of Christ has cut your own heart.

Young people, invite the Lord to go through every room of your house, every secret place, and cleanse it. You are called to occupy a throne, like Hezekiah. We are called to rule and reign in the earth. Lord, cleanse us while we are little in our own eyes, so that when you bring us to a place of battle, there will be nothing in us that the devil can get hold of. There was nothing in Hezekiah’s life that the devil could get hold of. God could answer his prayers in power! Without a single Israeli sword, without a single Israeli spear, the entire Assyrian army died in their tents. When in history has anything like that ever happened? Not before and not since!

Our God is the God of Hezekiah. He does not desire to strike down men, but he does desire to strike down demonic powers who have ruled over the lands of Latin America, who have held the people in bondage through fear. Why do Colombians offer sacrifices to idols? They think they worship God, but they worship the “god” of fear. How many in Colombia don’t know the God of love, don’t know the God of forgiveness, don’t know the God of mercy? All they know is the “god” of death, and of fear, and of oppression, and of darkness. They think this is God! No wonder the Lord wants to destroy those who are no “gods”! Sennacherib marched through nations and destroyed the gods that were no gods. But he himself was destroyed when he tried to come against the Living God!

Lord, let light so shine in Colombia that all the nations of Latin America will come and say, “What is this that God is doing?” Lord, do a work in our generation that is larger than we can imagine. Lord, bring forth the children that You desired from the beginning of the world: Colombian children, Venezuelan children, children from Chile, from Brazil, from Argentina, from Nicaragua, from Panama, from Guatemala, from Honduras, children from Mexico who will no longer be victims of darkness, but will be a generation that walks in the light!

Lord, do a new work and raise up an army, a church that is terrible as an army with banners, children rescued out of darkness and brought into the light. In Jesus name, Amen!”

I believe that now is a time for prayer, to give all your heart to God as King Hezekiah did. It is the hour to yield ourselves 100% to the Lord, because He also wants to give the nations of Latin America His 100%. He desires lives that are offered to Him forever, that are a fragrance, lives that will bear the fragrance of Jesus to the nations…