Judgment or Revival, Which Will It Be?

God will have His way on earth! His name “will be great among the nations, from the rising to the setting of the sun.” Jesus will have His beautiful, eternal bride out of every nation, tongue, and tribe on earth. But, will we be among the number of that great company who are ready and willing to be co-workers with the Lord, laborers who will bring in the great latter harvest from all nations on earth? “The Lord announced the word, and great was the company of those who proclaimed it.” (Psalm 68:11) This is not the work of one man, but of a company of believers united in heart and in purpose in Christ! 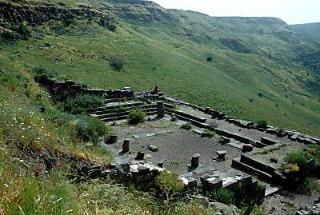 Ruins of the Gamla Synagogue in Israel

Revival is going to come, but are we ready for it? Are we seeking great things for ourselves, while the world is falling apart all around us, as Jeremiah’s servant, Baruch, did?

This is what the Lord, the God of Israel, says to you, Baruch: You said,
“Woe to me! The Lord has added sorrow to my pain; I am worn out with groaning and find no rest.” [The Lord said,] Say this to him: “This is what
the Lord says: I will overthrow what I have built and uproot what I have
planted, throughout the land. Should you then seek great things for yourself?
Seek them not. For I will bring disaster on all people, declares the Lord, but
wherever you go I will let you escape with your life.” (Jeremiah 45:2-5)

Are we seeking great things for ourselves, for our particular ministries, or are we seeking great things for God? Everything of this present world will be consumed by fire because, “This is what the Lord says: I will overthrow what I have built and uproot what I have planted.” God made this present earth, but one day He will consume His own handiwork with fire. All that will remain from this present world are the souls of men and women, and they will spend eternity in either heaven or in the lake of fire.

Some believers resist praying for revival, because great judgment has often followed great moves of God in history. Sometimes we want to have peace, but peace is just not an option. The marvelous revival of Israel under King Josiah was quickly followed by the terrible judgment of the Babylonian exile. As Yale’s famous historian, Edmund S. Morgan, pointed out, the Great Awakening united thirteen separate British colonies and gave them a sense of nationhood they had never had before. Nevertheless, two bloody conflicts, the French and Indian War and the American Revolution, followed that blessed season. The Fulton Street Prayer Meeting Revival was almost immediately followed by the terrible American Civil War in which about 750,000 people died. The great Welsh revival preceded the First World War by only a few years. The people of the Korean peninsula were blessed by a revival that touched the entire nation, north and south, shortly before the Japanese began their oppressive rule leading up to World War II, and also before the Korean War broke out, causing nearly two million casualties.

Judgment for sin is going to come and we cannot stop it! But we can ask for seasons of repentance to come first. Leonard Ravenhill had to handle this very issue, and wrote the following passage in 1962:

“The alternative may not be Christ or chaos: it may be Christ and chaos. I well remember a lady in
New Zealand saying recently that she feared to pray for revival because national revival seems to
be a prelude to coming judgment. Maybe she is right, but better to have revival followed by judgment
than to have judgment without a revival preparation. (Revival Praying, p. 19)

God does not want to judge men, but their rebellious actions force His hand. Nevertheless, even as judgment looms on the horizon, the Lord continues to seek to save all that He may from that coming judgment. He is “not willing that any should perish but that all should come to repentance.” (2 Peter 3:9, NKJV)

Right here, however, before we conclude, we must ask another question. God is not willing that any should perish. But are we willing for them to perish? Do we live our daily lives oblivious to the dying souls around us? Or, does it break our hearts that men, women, and children die simply for want of the saving knowledge of Jesus Christ? You can almost see Isaiah weep as he prophesied regarding his own generation, “For my people have been taken away for nothing…” (Isaiah 52:5)

How many in this generation are selling their souls for cheap nothings? They do not know that they have an eternal soul to save, a hell to flee, and a heaven to gain. And they will never know unless we first pray for them, and then go and tell them. May our God grant us brokenness of heart, and enable us to weep before His throne until repentance comes—until the Spirit of God is poured out from heaven above in reviving power!

(Based on a message given at the New Testament Missionary Fellowship)

This article is dedicated to John McCandlish Phillips for his decades of faithful prayer for revival in New York City and the nation, and for his kind editorial help.

Versions of the Bible Quoted:

All Bible references are from The New International Version
(The Zondervan Corporation: Grand Rapids, Michigan,
1995) unless otherwise noted.