The Greatest Miracle of All… Forgiveness! 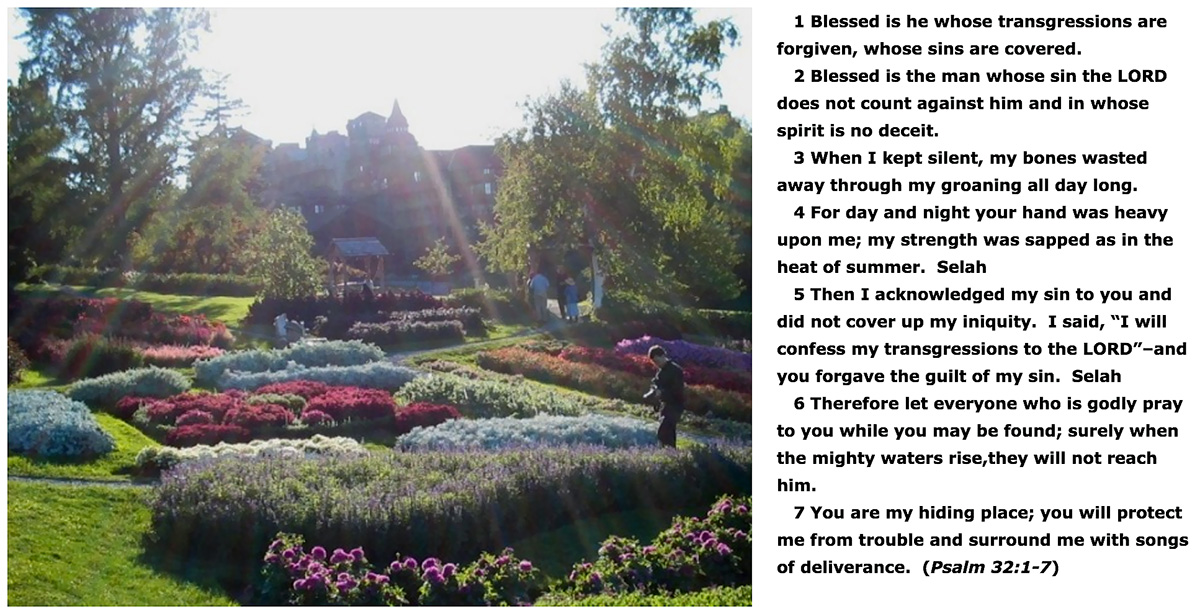 The Bible tells us of many miracles: the blind receiving their sight, the lame walking, and even the deadrising again to life.  But the greatest of all miracles is forgiveness, the free and complete pardon of an undeserving sinner by a righteous and holy God.  As Psalm 32 says, “Blessed is he whose transgressions are forgiven, whose sins are covered.

”Why is forgiveness such a marvelous gift? Consider for a moment that guilt is the most common symptom psychologists deal with in their patients today. Guilt is the inescapable weight that oppresses our consciences when we do something wrong. We try to deny what we have done, or attempt to deceive ourselves and others with excuses. Nevertheless, whether we regret our actions or not, we are powerless to take back what we have done. In physics, every action has an equal and opposite reaction. In life every deed, whether good or evil, has consequences, though in varying measures depending on the magnitude of our actions. Guilt is the inescapable reaction of the human soul when we do something wrong, even when we refuse to admit that we are wrong.

How many people today spend years living under a cloud of guilt! The alcoholic or drug addict regrets becoming the prisoner of a habit, but sees no way out. He or she lives with a deep sense of failure and powerlessness. A father who failed to be there when his children were young finds that they have no interest in him when they are older. He never really knew his own children, and they in turn never got to know him. For another, a fling with marital unfaithfulness, which seemed so exciting for a short while, has now turned into life-long heartache and regret!

Even worse, there are people who have to live with one of the most terrible burdens any soul can bear, the guilt of having taken someone’s life. During an evangelistic outreach we held a few years ago in Yonkers, New York, a man who had been a street person and an alcoholic for some thirty years came forward for prayer. He had never been able to cope with the guilt he felt over taking the lives of young and old while fighting in special operations behind the lines in the Vietnam War. Among other things, he had to shoot an elderly grandmother when she pulled the pin out of a grenade just after he said hello to her and was passing on by. To escape the pangs of remorse, he gave himself up to the miserable consolation alcohol offers. His body survived the war, but his mental and emotional life were devastated by the horrors he had experienced. He prayed that day for Christ’s forgiveness for acts for which he had never been able to forgive himself.

Psychologists cannot free people from the power of guilt. They may try to help patients cope with their feelings, or at least to understand them better. But no human being can wave a magic wand for another that can free him or her from the weight of guilt. Only God can do that, and only at great cost! You see, even God cannot and will not undo our past. The One who made us and gave us life also gave us free will to choose what we will, or will not, do. He for one will not pretend that we are anything other than exactly what we are, unrighteous sinners who prove just how bad we are every day. One passage in Job chapter 34 states of the Lord: “His eyes are on the ways of men; he sees their every step. There is no dark place, no deep shadow, where evildoers can hide. God has no need to examine men further, that they should come before him for judgment.” (Job 34:21-23)

By contrast, how many graveside eulogies call a dead thief a “generous member of society,” or an abuser “a loving family man,” or even a murderer “a person who gave so much to us all!” I once listened to the eulogy of a dead Mafioso on the news in New York City—and was astounded at what a wonderful person he had been!

“For this is what the Lord says—he who created the heavens, he is God; he who fashioned and made the earth, he founded it… he did not create it to be empty, but formed it to be inhabited— I am the Lord, and there is no other…. I, the Lord speak the truth; I declare what is right…. Turn to me and be saved, all you ends of the earth.”

How can a just and holy God forgive the unforgivable things men do every day? If you and I are bothered when terrible events occur, how do you think the Lord feels? We see only an infinitesimal part of what goes on, but He sees every action and knows the thoughts of every person on earth. As a father of four precious boys, I could not handle knowing about even a fraction of the child abuse that goes on in this world.

How does God handle evil? If you think He is some kind of clockmaker who wound up the universe and then walked away, you are tragically mistaken. Jesus said of our Heavenly Father, “Are not two sparrows sold for a penny? Yet not one of them will fall to the ground apart from the will of your Father.” If the Lord cares this much about the birds, how much more do you think He cares about us? Jesus said of us, “Even the very hairs of your head are all numbered. So don’t be afraid; you are worth more than many sparrows.” (Matthew 10:29-31) Very few of us would even be willing to sit still long enough to count the hairs on our heads, but God knows their number!

What then has the One who created us done to help us overcome the challenges of temptation and evil? The apostle John wrote, “The Word became flesh and lived for a while among us. We have seen his glory, the glory of the one and only Son, who came from the Father, full of grace and truth.” The eternal Son of God, the co-creator of this universe, became a Son of Man, subject to every temptation that you and I face—but never giving in to any of them! Jesus came as a teacher, but teaching alone could not save us. He was also a prophet, but prophecy alone could not save us either. He is our great Example, but how often we fail to live up to examples!

As Jesus told His disciples repeatedly, He came to this earth chiefly to die: the Good for the bad, the Righteous One for the unrighteous. He came from heaven to earth to bear the consequences in His own body of all the awful things that people like you and me have done from the beginning of creation until now. The Maker of the universe took on human form and humbled himself to die an awful death on a Roman cross, all because of our rebellion and disobedience towards God. He died so that we would not have to die. As Jesus’ disciple Peter wrote in 1 Peter 2:24-25,

“He himself bore our sins in his body on the tree, so that we might die to sins and live for righteousness; by his wounds you have been healed. For you were like sheep going astray, but now you have returned to the Shepherd and Overseer of your souls.”

Because He took our punishment on Himself, He has the right to do for us what no one else can. He can forgive us for all we have ever done, and give us an entirely new life. Jesus alone can free us from the power of guilt and sin. The prophet Micah wrote, “Who is a God like you, who pardons sin and forgives the transgression of the remnant of his inheritance? You do not stay angry forever but delight to show mercy. You will again have compassion on us; you will tread our sins underfoot and hurl all our iniquities into the depths of the sea.” (Micah 7:18-19)

Are you willing to confess your sins today and have God cast them into the sea of His forgetfulness? Are you willing to receive the great and costly gift Christ purchased for you by shedding His blood on the cross in your place, for your sins? Or will you hold onto your sins and even defend them—and face awful consequences when you one day stand before God to give account for what you have done with your life? “Do not be deceived: God cannot be mocked. A man reaps what he sows. The one who sows to please his sinful nature, from that nature will reap destruction; the one who sows to please the Spirit, from the Spirit will reap eternal life.” (Galatians 6:7-8)

Listen for a moment, before we close, to some beautiful words from Job 36, verses 5-12,

“God is mighty, but does not despise men; he is mighty, and firm in his purpose. He does not keep the wicked alive but gives the afflicted their rights. He does not take his eyes off the righteous; he enthrones them with kings and exalts them forever. But if men are bound in chains, held fast by cords of affliction, he tells them what they have done—that they have sinned arrogantly. He makes them listen to correction and commands them to repent of their evil. If they obey and serve him, they will spend the rest of their days in prosperity and their years in contentment. But if they do not listen, they will perish by the sword and die without knowledge.”

Jesus does not despise you or me, but loved us enough to lay down His life for our sakes. Let today be the day you admit to the Lord what He already knows, that you are a sinner, that you are not the person you ought to be. You are in fact a person who needs the power of Almighty God to make you all that you should be, and all that He hopes for you to be. John the apostle wrote, “If we claim to be without sin, we deceive ourselves and the truth is not in us. If we confess our sins, he is faithful and just and will forgive us our sins and purify us from all unrighteousness.” (1 John 1:8-10)

Will you receive today the greatest miracle of all, the miracle of forgiveness? All whom Christ forgives, He then gives an entirely new start in life because, in His own words, “I have come that they may have life, and that they may have it more abundantly.” (John 10:10) Pray with me these words,

“Father, I come to You the only way I can, as a sinner who is unworthy of Your love. Yet You loved me enough to send Your beloved Son to die for me on the cross, even when I was still Your enemy. Lord Jesus, I receive you today as my Savior. I confess all my sins, and ask you to forgive me. Please wash away the stain and power of sin in my life with the precious blood you poured out on the cross. I also give you my life, even as you gave me yours, and receive you as the Lord of my life. Teach me your ways, and grant me to do Your will. Give me that abundant life you bought for me on the cross of Calvary. In Jesus’ name I pray, Amen.”

(All quotations are from the New International Version.)