The Healing of a Little Boy at Yale

On April 13, 1994, twin boys were born into the family of Chris and Pilar White at St. John’s Hospital in Yonkers, New York. The first to arrive was Jacob, and two minutes later, his brother Matthew appeared. The twins were both in excellent shape and continued to develop normally throughout their first year.

During the summer of 1995, our family went on a six-week trip to Colombia, South America, the homeland of my wife, Pilar, the twins’ mother. Upon returning, Pilar observed that Matthew’s right leg was beginning to bend inward. When Jacob began to try to walk late in the summer of 1995, Matthew also tried to stand up and walk, but his right leg would not support him. He kept falling down on his right side.

Pilar then asked Susan Burrows, a good friend with medical training who was staying with us at the time, to examine Matthew. She confirmed that the leg was indeed bent inwards. She also noticed that the right leg was longer than the left, and suggested that he be taken to see the boys’ pediatrician. The doctor was very concerned at what he saw, saying that it appeared to be serious. He referred us to a pediatric orthopedist who in turn referred us to a specialist at the Hospital for Special Surgery in New York City.

After tests at HSS in August 1995, we were informed that longitudinal voids had developed in the marrow of Matthew’s right leg. Our boy’s lower leg bone was indeed bending inwards. We were told that Matthew’s likely condition was an extremely rare disease for which there was neither a name nor a cure.

Extensive tests were run on Matthew throughout the fall, tests that were very difficult for a one-year-old to go through. They were also difficult for us to watch. At the time, Matthew was befriended and much helped by a young man that we had met at Yale, Sean Robertson. He was able to be with Matthew during some of the more difficult tests. The end result was grim—confirmation that Matthew did indeed have a rare and incurable condition. His leg would continue to bend, and the little boy would be a cripple for the rest of his life.

Even with no possibility of a cure, the physician at HSS informed us that he and other doctors wanted to follow Matthew’s disease for purposes of study. We were told that HSS was one of the chief centers in the United States for the study of this particular disease. The doctor later asked our permission to hold a meeting with several doctors present, including a top pediatric specialist from the University of Iowa Medical School. The eight doctors examined Matthew together in a small lecture hall at the hospital. Neither Pilar nor I will ever forget that somewhat surreal setting of our little boy surrounded by famous doctors with great interest in, but no answer to the problem at hand.

Throughout the fall and winter, Matthew’s right leg continued to bend inwards more and more. We told our doctor at HSS that people all over were praying for Matthew: friends from church and my alma mater, Yale, missionaries overseas, as well as staff and students at the Convent of the Sacred Heart in Manhattan where I was teaching mathematics.

Members of our church had also anointed the boy with oil and held a special time of prayer for his healing. The doctor replied that prayer certainly could not hurt since there was nothing that doctors could do to make Matthew better. On one particular day, Pilar and I were sitting in chairs outside a room where Matthew was being examined when a Jewish boy of about 11 or 12 walked into the hallway on crutches, dragging his curled and bent leg behind him. I sensed that this boy probably had the same condition as our own child. Fighting back tears as that boy and his father sat down in chairs next to us, I began to pray for the little Jewish boy as well as for Matthew. I silently pleaded with the Lord that Matthew would not have to spend the rest of his life on crutches, dragging his right leg behind him.

By then, our family’s insurance company was refusing to pay the very considerable medical expenses related to Matthew’s illness. I had to go through a process of months of phone calls and letters, pleading with the company before each bill would finally be paid. This had to be repeated for every bill that Matthew incurred, and the business office at Convent of the Sacred Heart did all that they could to intercede with the insurance company. After more than a half year of this torture, I wrote a strong letter to the insurance company, pointing out to them how cruel it was to treat a family so inconsiderately when they were already going through such deep suffering.

Shortly thereafter, the business manager of my school was at a gathering of school administrators. At the meeting, a representative from our insurance company showed my letter (with all personal information blocked out) to all present—as an example of how a medical insurance policyholder can fight back effectively when an insurance company refuses to pay medical bills! Knowing the story of what was happening with our son, Matthew, our school business manager immediately recognized who the letter was from and told me about it later back at school. From that point on, the insurance company paid every bill quickly until Matthew’s medical care ended.

In the early spring of 1996, the specialist at HSS informed Pilar and me that he did not understand what was happening, but that Matthew’s bone marrow was complete and the leg was beginning to turn around and straighten out. He said that he had never seen this happen before and that he did not have an explanation for it. Matthew still could not walk normally like his twin brother, but he could move around more freely.

In April 1996, our family took part in a Gospel outreach on Yale’s Cross Campus, the open green in front of Sterling Memorial Library, the university’s main library. The event was sponsored by Yale Students for Christ, InterVarsity, Living Water, and other Christian groups on campus. Around one hundred undergrads were present as students spoke and gave testimonies, with Living Water singing. Other students were giving out Bibles and books at a table nearby. I had led Bible studies at Yale for over two decades so many students knew Matthew and his disability. Some had even babysat for our three boys.

While I was taking a turn speaking, a little boy ran in front of me kicking a soccer ball—step, step, kick,step, step, kick…. My wife pulled on my sleeve and pointed out that the little boy was Matthew! The child, who had always waddled, never walked, was now running down the green! Students all around were in tears, but soon there were joyful exclamations at the miracle God had just performed 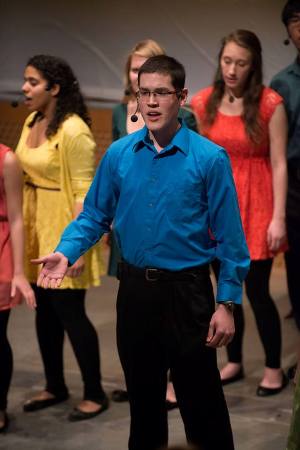 With the change in Matthew’s condition, Pilar and I took our little boy back to the specialist at Hospital for Special Surgery. The night before that appointment, Matthew’s twin brother Jacob had climbed up and knocked down a framed picture on the wall. He got hold of some of the broken glass, and somehow cut Matthew with a three-inch gash on the leg that had just been healed. Thank God that the cut was quite superficial, but Pilar was so afraid of being accused of neglect that she pleaded with her husband not to tell the doctor about the glass.

The next day while waiting for the doctor, I sat down in a bean bag chair and all three boys climbed into my lap, each with his own stuffed animal. When the doctor walked into the examining room and saw the scene in front of him, he put his hands on his hips and said, “Hmm, they are all cut from the same bolt of cloth!” Pilar, not understanding the American idiom, exclaimed, “No, no, doctor, it was the glass!” The doctor turned to Pilar with utter incomprehension, not knowing what she was talking about. In fact, he never noticed the cut, but simply made the happy announcement that Matthew was indeed well and that we would not need his services any more.

Matthew today is a student at Massachusetts Institute of Technology, and a follower of Jesus Christ. Among other things, he is part of Cru at MIT, and is singing with Cross Products, the university’s Christian a cappella chorale. He has no remaining problems from ever having been sick, just dark and dim memories of a difficult time in his early childhood. Truly as the Scriptures declare, “For I am the Lord who heals you.” (Exodus 15:26, New King James Version)