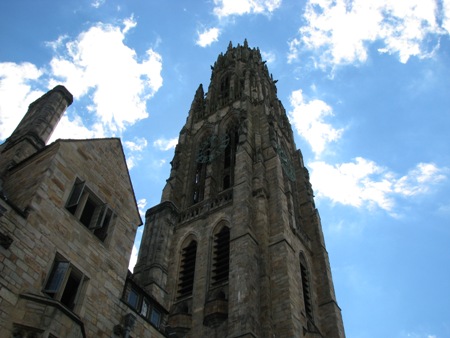 Academia and the media usually view Darwin’s theory of evolution as a fact, a concept so thoroughly established as to be beyond serious challenge. Yet when Dr. Wayne Detmer, a good friend who is now working at an inner city medical clinic in Chicago, attended his Introductory Biology class at Yale, the professor asked the students: “How many people here believe that God created man?” Just a few hands went up, six or so, out of about 150. The professor then said, “I have to admit that it takes as much faith to believe in evolution as it does to believe that God created man.”

That professor is not alone in having doubts. In November 2007, The New York Times ran an article entitled “Taking Science on Faith.” The article pointed out that both religion and science require faith. “All science proceeds on the assumption that nature is ordered in a rational and intelligible way… The most refined expression of the rational intelligibility of the cosmos is found in the laws of physics, the fundamental rules on which nature runs…. But where do these rules come from? And why do they have the form that they do?” (Davies, Nov. 24, 2007)

Before getting into evolution, consider the meaning of the word “science.” Webster’s, New World Dictionary defines science as, “systematized knowledge derived from observation, study, and experimentation carried on in order to determine the nature or principles of what is being studied.” (Webster’s, 1305). Within its realm—inferring theories from observable facts—science is marvelous. However, the greatest scientific problem with investigating the origin of life and the universe is that none of us were there. We cannot go back in time nor accurately reproduce the conditions under which life began, let alone how it developed thereafter.

If archeology is forced to draw its conclusions based on a fraction of the original evidence, how much more must the study of origins make educated guesses based on trace evidence left behind over the ages.

In teaching Advanced Placement Statistics, I warned my students about conclusions based on extrapolation: estimating the unknown on the basis of known behavior. Extrapolation can produce highly misleading and unreliable conclusions, conclusions that are handled cautiously in all fields—except, it seems, in the study of origins. We can only estimate what happened in the development of life and why, with a large margin of error. A measure of humility is required, therefore, of any person investigating such matters, as reflected in the Lord’s words to Job in chapter 38, verse 4, “Where were you when I laid the earth’s foundation?”

We should also define here what we mean by the word evolution. There are actually two very different types or levels of evolution: micro-evolution and macro-evolution. Micro-evolution is hardly controversial at all. It simply describes that built in capacity of all living organisms to adapt to their environment, and to accumulate favorable but relatively minor changes over time. It happens to individual organisms within a species, or among species within the same genus. Ironically, the case studies that Darwin includes in his classic work, The Origin of Species, involve only micro-evolution. A perfect example is the natural selection of a darker moth over a lighter one in the face of air pollution in 19th-century England. The lighter colored moths clinging to the side of a soot-covered tree were more visible to birds, while the darker moths were more likely to escape becoming lunch, so the darker moths prevailed. Ironically, with cleaner air in London since Darwin’s day, the lighter colored moths have re-appeared. Overall, however, when all such adaptive changes have occurred, a moth is still a moth.

Macro-evolution is more controversial in that it involves the claim that accumulated small changes, what Darwin described as “numerous, successive, slight modifications” over sufficient time can entirely explain the development of every living organism on earth. In Prof. Michael Behe’s words, “In its full-throated, biological sense, evolution means a process whereby life arose from non-living matter and subsequently developed entirely by natural means. That is the sense that Darwin gave to the word, and the meaning that it holds in the scientific community.” (Darwin’s Black Box, pp. x-xi) Darwin insisted that the development of all life can be traced backwards through time along the branches of a single tree descending from a single root, something he called “the great Tree of Life.” Ironically, the “tree of life” is a Biblical metaphor, but as Friedrich Nietzsche pointed out, Darwin’s aim was the “calm annihilation of the fairy-tale fable of the Creation of the World.” (Peter Quinn, “The Gentle Darwinians,” 8)

From this point on, when I use the word evolution, I am speaking of macro-evolution. While the intelligence of those who question this form of evolution for religious reasons (or even academic ones) is popularly ridiculed, many scientists and others who hold to the theory of evolution guard their turf with a religious zeal that is itself suspect. A Chinese paleontologist wrote to Phillip Johnson, the author of Darwin on Trial, “In China we can criticize Darwin but not the government. In America, you can criticize the government but not Darwin.” (World Magazine, 2/26/00, 32)

The Oxford zoologist and champion of evolutionary science, Richard Dawkins, wrote that, “Darwin made it possible to be an intellectually fulfilled atheist,” that is, Darwin’s theory supported his particular perspective on religion. While critical of the “intolerance” of creationists, this same man also exclaimed, “It is absolutely safe to say that, if you meet somebody who claims not to believe in evolution, that person is ignorant, stupid or insane (or wicked, but I’d rather not consider that)” (Johnson, 9).