The Role of the Evangelist in the Body of Christ

As evangelists, we need to understand our place and our role in the church. Ephesians 4:7-8, 11-14 says,

“But to each one of us grace was given according to the measure of Christ’s gift. Therefore, He says: ‘When He ascended on high, He led captivity captive, and gave gifts to men….’ And He Himself gave some to be apostles, some prophets, some evangelists, and some pastors and teachers, for the equipping of the saints, for the work of ministry, for the edifying of the body of Christ, till we all come to the unity of the faith and of the knowledge of the Son of God, to a perfect man, to the measure of the stature of the fullness of Christ….”

As the son of a small-town minister, I grew up believing that to serve the Lord I had to be a minister or a missionary. The idea of being an evangelist never entered my mind, until the Lord spoke plainly to me about my calling one Saturday morning when I was 20 years old.

My father, on the other hand, broke through in prayer much earlier, understanding that I was called to be an evangelist before I was even born. As the Lord spoke to Jeremiah in chapter 1, verses 5-8,

“Before I formed you in the womb I knew you;
Before you were born I sanctified you;
I ordained you a prophet to the nations.”

But the Lord said to me:
“Do not say, ‘I am a youth,’
For you shall go to all to whom I send you,
And whatever I command you, you shall speak.
Do not be afraid of their faces,
For I am with you to deliver you,” says the Lord.

I would love to be able to say that I quickly responded “Yes!” to the Lord’s calling on my life. But the fact remains that I immediately responded, “No, Lord! I can’t be an evangelist! I don’t know how to speak!” Two days later, however, a letter came in the mail from a missionary who spent almost 50 years in Colombia, South America. The Lord had given Mrs. Hannah Lowe a vision, and shown her two things: that God had called me to be an evangelist, but that I was going the wrong way, running away from that calling. Oh how patient the Lord is with His stubborn, unbelieving children! 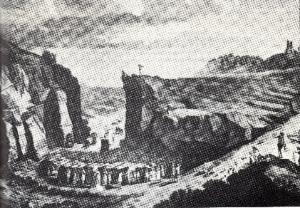 George Whitefield Preaching at Cornwall
During the First Great Awakening

The role of the evangelist is critical to the building up of the Body of Christ. And, regardless of what some may claim in our day, the need for evangelists will never end until Christ returns. The apostle, the prophet, the pastor, and the teacher all have differing callings, but every role is ordained of God and is critical to the building up of the church. As is clear from the life of Paul, an apostle is intended by God to have far-seeing vision both for the church and for a lost world. By contrast, those whom God calls to pastor and teach His flock must focus chiefly on those who are already among the redeemed. If the entire leadership of the Body is made up only of those genuinely called by God to be pastors (or elders) and teachers, the church’s vision to reach the lost will be far more circumscribed than God intends.

As Abraham called his servant Eliezer to go out and find a bride for his son, Isaac, so we evangelists are called to search out a Bride for Christ among those who are now far away from God’s Kingdom. Searching out gems for Jesus among multitudes of lost, contentious, unpromising, and even depraved souls is hard work, but it is work that is ordained by God! Consider again Jesus’ words in John 15:16, “You did not choose Me, but I chose you and appointed you that you should go and bear fruit, and that your fruit should remain….”