First of all, the true evangelist cannot rest at peace while souls are perishing, dying because they have never had the chance to experience the grace of Jesus Christ. The heart and soul of the evangelist focuses on the lost. He or she may minister to the saints in various capacities, but the heart inside constantly yearns to be in the harvest fields among the perishing. Many believers live perfectly comfortable lives, happy to be saved, oblivious to the lost all around them. But the man or woman whom Jesus has touched with His burden for dying souls finds a restlessness inside that is not so easily satisfied. As Proverbs 24:11-12 warns:

“Deliver those who are drawn toward death,
And hold back those stumbling to the slaughter.
If you say, ‘Surely we did not know this,
‘Does not He who weighs the hearts consider it?
He who keeps your soul, does He not know it?
And will He not render to each man according to his deeds?”

How easy it is to claim that we did not know, that we did not see the souls perishing all around us. Many people who lived right next door to the Nazi concentration camps during World War II claimed afterwards that they knew nothing about what was going inside those places of death. Remember Jesus’ response to the wicked who claimed ignorance in Matthew 25:44-46, “Then they also will answer Him, saying, ‘Lord, when did we see You hungry or thirsty or a stranger or naked or sick or in prison, and did not minister to You?’ Then He will answer them, saying, ‘Assuredly, I say to you, inasmuch as you did not do it to one of the least of these, you did not do it to Me.'”

While riding in a coach one day in England more than 100 years ago, the Lord gave a vision to William Booth, the mighty evangelist who founded and built the Salvation Army. Here is part of his description of that vision, lengthy but highly worth considering:

“I saw a dark and stormy ocean. Over it the black clouds hung heavily; through them every now and then vivid lightening flashed and loud thunder rolled, while the winds moaned, and the waves rose and foamed, towered and broke, only to rise and foam, tower and break again. In that ocean I thought I saw myriads of poor human beings plunging and floating, shouting and shrieking, cursing and struggling and drowning; and as they cursed and screamed they rose and shrieked again, and then some sank to rise no more. And I saw out of this dark angry ocean, a mighty rock that rose up with it’s summit towering high above the black clouds that overhung the stormy sea. And all around the base of this great rock I saw a vast platform. Onto this platform, I saw with delight a number of the poor struggling, drowning wretches continually climbing out of the angry ocean. And I saw that a few of those who were already safe on the platform were helping the poor creatures still in the angry waters to reach the place of safety.

On looking more closely I found a number of those who had been rescued, industriously working and scheming by ladders, ropes, boats and other means more effective, to deliver the poor strugglers out of the sea. Here and there were some who actually jumped into the water, regardless of the consequences in their passion to ‘rescue the perishing.’ And I hardly know which gladdened me the most – the sight of the poor drowning people climbing onto the rocks reaching a place of safety, or the devotion and self-sacrifice of those whose whole being was wrapped up in the effort for their deliverance.

As I looked on, I saw that the occupants of that platform were quite a mixed company. That is, they were divided into different ‘sets’ or classes, and they occupied themselves with different pleasures and employments. But only a very few of them seemed to make it their business to get the people out of the sea. But what puzzled me most was the fact that though all of them had been rescued at one time or another from the ocean, nearly everyone seemed to have forgotten all about it. Anyway, it seemed the memory of its darkness and danger no longer troubled them at all. And what seemed equally strange and perplexing to me was that these people did not even seem to have any care – that is any agonizing care – about the poor perishing ones who were struggling and drowning right before their very eyes… many of whom were their own husbands and wives, brothers and sisters and even their own children….

But the thing to me that seemed the most amazing was that those on the platform to whom He called, who heard His voice and felt that they ought to obey it – at least they said they did – those who confessed to love Him much were in full sympathy with Him in the task He had undertaken – who worshipped Him or who professed to do so – were so taken up with their trades and professions, their money saving and pleasures, their families and circles, their religions and arguments about it, and their preparation for going to the mainland, that they did not listen to the cry that came to them from this Wonderful Being who had Himself gone down into the sea. Anyway, if they heard it they did not heed it. They did not care. And so the multitude went on right before them struggling and shrieking and drowning in the darkness.

And then I saw something that seemed to me even more strange than anything that had gone on before in this strange vision. I saw that some of these people on the platform whom this Wonderful Being had called to, wanting them to come and help Him in His difficult task of saving these perishing creatures, were always praying and crying out to Him to come to them!… And all the while He was down (by His Spirit) among the poor struggling, drowning creatures in the angry deep, with His arms around them trying to drag them out, and looking up – oh! so longingly but all in vain- to those on the rock, crying to them with His voice all hoarse from calling, ‘Come to Me! Come, and help Me!‘” 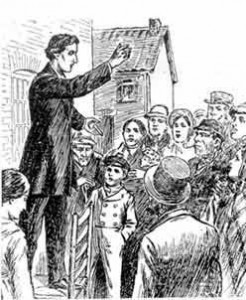 As 2 Peter 3:9 plainly declares, “The Lord is not slack concerning His promise, as some count slackness, but is longsuffering toward us, not willing that any should perish but that all should come to repentance.” God broke the heart of William Booth as a young man, and then used him and his beloved wife, Catherine, to rescue tens of thousands of England’s oppressed underclass of incurably poor, helpless, and hopeless souls. As some scholars have since pointed out, the work of the Salvation Army so transformed English society at the end of the 19th century that it is likely that the Booths spared England from a Communist revolution. Before they and other like-minded believers arrived on the scene, multitudes of England’s poor had been no less miserable than the oppressed masses of Czarist Russia.

But now? Now it is our time–and our turn! Are we willing to let men, women, and children in our generation perish for lack of the salvation that only Jesus can give? The terrible reality is that many believers prove every day how little they care about the lost by their actions, or lack thereof. As I said before, the Lord had to work on my heart for a long time before I was willing to be an evangelist. About ten years ago, my wife persuaded me to go with her to see the movie Titanic over my strong objections. I knew too much of the tragic history of that ship to enjoy a silly Hollywood romance (I have nothing against real romance, just the Hollywood version). I still would not recommend that movie, but that day, my wife was right and I was wrong. I sat weeping in my seat during the scene near the end when survivors, resting in lifeboats that were less than half-filled, refused to go back and rescue hundreds more who were still drowning in the freezing North Atlantic.

A lifeboat from the Titanic

It was then that the Lord spoke to me, pointing out that we believers are like those in the lifeboats. We are so glad to be safe and dry that we fail to care about those still drowning all around us. In that theater, the Lord spoke to me words that I will never forget: “Don’t run from the fire!” What fire, you may ask? The fire of God’s love that wants to purify us to the bottom, to burn up all the dross that will never fit in the Kingdom of Heaven–until we become vessels fit for the Master’s use. The fire of the Spirit that, having rescued us, wants to burn so strongly in our hearts that we are no longer willing to let others perish, dying for the want of the help we could give them. The fire that brings tears to our eyes as we pray for others because our hearts are filled with the love of the One who is “not willing that any should perish.” For two or three years after that day in the theater, I could not listen to the theme song of the movie Titanic, either on the radio or in a store, without beginning to weep again. Oh, that God would break our hearts–until we care as He cares, and become willing to go out at any cost to “rescue the perishing.”